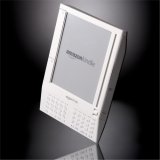 After a few weeks of use, I thought I’d share my thoughts on Amazon’s Kindle. The Kindle is my second electronic book reader, my first was the Sony Reader, which I previously touted as my new favorite gadget. Now I must apologize to Sony and my lovely wife Katherine, who gave me the reader for Father’s Day last year, only to see me cast it aside just a few months later, but the Kindle pretty much kicks the Sony Reader’s ass into the dustbin of obsolescence.

The Sony Reader’s failings basically amounted to an inadequate content library (only about 15k titles when I first got it) and the clunky PC-only (bad for a Mac guy like me) client software that was necessary to browse and purchase titles and then download to the reader via a USB connection.

Amazon addressed all of Sony’s issues: Amazon’s library of titles is 110k+ and growing, and the tight integration of the device (and on the web via browser) with the Amazon.com Kindle store is seamless. Add to that the fact that there is no subscription fee for data access via Amazon’s Whispernet (of course, I know I’m really paying for the EVDO access with each book purchase), and you have a product that is in a class unto itself. The ability to browse and purchase directly from the device is a game-changer, though I have to say that I get an equal amount of pleasure buying via my web browser and watching the e-book I’ve just purchased magically appear moments later on my Kindle.

The Kindle’s display-driver for their electronic ink display is also a generation better than Sony’s — page turns happen much more quickly, and the ability of the Kindle to selectively refresh small portions of the screen also make the reading and browsing experience far better than it was on the Sony Reader.

I’ve got a few complaints about the Kindle, which unfortunately software upgrades will not address, since my critiques are with the industrial design. While I get that the idea behind the sloped right-hand side of the Kindle was to make it look and feel like the unread pages of an open book, the lack of symmetry in the device is something I have yet to get used to: the thing just doesn’t feel as comfortable in my hands as the Sony Reader did.

Second, the page-turning buttons on the Kindle may be a little bit too big and too easy to press, so I find myself accidentally changing pages or hitting the back button, which gets a little tiresome.

Finally, the device also feels a little bit junky and it tends to pop out of the leather cover it comes with on a regular basis, particularly because the power and network switches are inexplicably on the back of the device. I prefer to read my Kindle when it is in the cover because it feels more like a book to me, but I’m about to give up on that because I pop it out of the cover nearly every time I power it on or toggle the network connection. Sort of feels like the leather cover was a bit of an afterthought.

So while I think Amazon stumbled a bit on the industrial design side of the house, overall the Kindle is an amazing device and a fantasy product for a gadget freak and avid reader like myself. I’ve not had any issues with network coverage (though I’ve not taken it out of the US) and the seamless integration between the device, the wireless access, the simple setup process and the ability to browse and purchase from the device itself and from Amazon.com on the web, without ever requiring me to plug the Kindle into a PC, is just great. Way to go Amazon!

As a side note, I’m excited to see more devices like the Kindle that are invisibly integrated with a WAN data network and back-end service and/or website and offers the buyer a one-time payment at time of purchase such that there is no ongoing subscription fee associated with the network access component. Hiding that cost from the purchaser (even if the network cost is actually buried in other ongoing transactions related to the device/service) will enable entirely new categories of devices to proliferate.