My friend Jeremy Toeman turned me on to a site called Cuturegraph a few weeks ago, and I’ve been laughing on a regular basis ever since. Basically, they publish charts and graphs that make amusing pop-culture references. And they crowd-source their content. I was inspired and submitted one of my own, shown above. You’ve got to be a Sting fan and own the Ten Summoner’s Tales album to get the joke. So go ahead and subscribe to culturegraphs’s feed or submit an idea of your own. 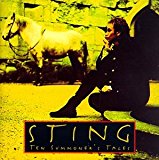