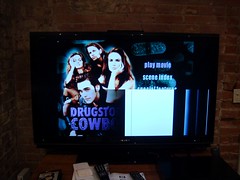 Warning: long rant ahead, but I just concluded the worst and most protracted customer-service nightmare of my life and feel compelled to share it, since my experience was just preposterous. The subtitle of this post should be why you shouldn’t buy a big-screen TV online, even though it is so much cheaper than at your favorite big-box electronics retailer. Over the past several years, I’ve attended CES on a regular basis and have always been impressed by Sharp’s Aquos LCD TVs on display. I am already a satisfied owner of a 42″ 1080p Sony Bravia XBR Series LCD TV, but when it came time to buy a new TV for the guest room, I thought of all those beautiful Sharp Aquos TVs arranged on the conference hall floor in a big pyramid at CES and decided to give Sharp a try. Plus, they had just come out with screens with a 120Hz refresh rate, and they were a bit cheaper than the equivalent Sony models. After shopping in-person at a few bricks-and-mortar retailers, I determined online prices were nearly one thousand dollars less for the same TV. So I took the plunge and bought a 52″ Sharp Aquos LC-52D92U via Amazon. Little did I know, it would take more than four months of phone calls and repair service visits to my house after I received the TV I ordered before it would be functional. Here’s the timeline:

February 9th, 2008. Order TV on Amazon, but using one of their affiliate merchants, Butterfly Photo. TV arrives the following week.

February 26, 2008. Finally set up the TV, only to discover that the lower-right quadrant of the screen is non-functional. (See my picture at the head of this post.)

February 27, 2008. Contact Amazon. Amazon sends me to their affiliate, Butterfly Photo. Butterfly advises I must deal directly with Sharp for warranty service.

February 28, 2008. Call Sharp Aquos Advantage Support. They ask for pictures of the problem. I send pictures, and ask for a replacement unit. Turns out warranty is for repair only, not a replacement unit. They put me in touch with the only Sharp-authorized service center in the greater Denver area, Downtown Radio/DTR.

February 29, 2008. Call DTR to arrange in-home repair. They only visit Boulder once or twice a week, with the typical customer-hostile four-hour arrival window. Given my travel schedule, the first appointment I can schedule is for April 11th.

April 11th, 2008. DTR technician arrives, and brings along a new motherboard for the TV. Finally, the whole screen works, and the dead lower-right-quadrant is now functional. Repairman leaves. I fire up a Blu-ray, Galapagos. Now that the screen works, I notice a new problem. The display quality is terrible, with massive solarization of colors and pixels that change color even on a still image.

April 11th, 2008. Call DTR to report the new problem. They send me back to Sharp support. Call Sharp. They ask me to send more pictures. But the problem only happens now with moving images, so I have to arrange alternate means (yousendit.com) to send them a large video file so they can diagnose the problem. They confirm there is an issue (duh) and tell me to schedule an appointment with DTR. I call DTR. Next appointment I can make isn’t until May 13th. Same convenient four-hour arrival window.

May 13th, 2008. DTR technician arrives, with yet another motherboard in hand. Replaces motherboard. Now my TV won’t even turn on. Technician tells me that at least a third of the motherboards he gets from Sharp to use for repairs fail. Technician orders a third replacement motherboard for my TV. Must wait 10 days for it to arrive before new appointment can be scheduled.

May 23rd, 2008. DTR calls me to tell me new motherboard has arrived and to schedule a new appointment. I get one for May 30th.

May 30th, 2008. DTR technician arrives. Replaces motherboard. Now TV turns on, but video problem persists. This technician seems to have more of clue and looks at the video and determines that the new problem is, in fact, not with the motherboard at all, but rather with the LCD controller board. He calls Sharp to order a new motherboard and a new LCD board. Now I have to wait another 10 days.

June 20th, 2008. DTR technician arrives, replaces motherboard and LCD controller. TV (effin’ finally) works. Video quality problem appears to be solved, or at least drastically improved. I’m still not convinced that the display quality on my TV (now a frankenstein full of refurbished parts) matches the Sharp TVs I saw at CES, but I’ve wasted many hours and over four months have elapsed since I made the purchase, so I am going to declare it good enough and move on with my life.

Whew. Tired yet? Clearly, had I known in advance the bad luck I was going to have with this TV, I would have just bought it at a local retailer, who would have happily taken the defective unit back and replaced it with a new one. I admit I thought twice about ordering it online when I read the retailer’s policy that they won’t exchange or replace TVs over 20″ (who buys a TV smaller than 20″ these days anyway?), but the price difference was too large not to buy it online. Besides, I had never had a problem with an online purchase before.

I will say, to Sharp’s credit, that every time I dealt with Sharp support and DTR, the people I interacted with were unfailingly professional and friendly, so I can’t fault the quality of the people performing the service, though the end result of their network of third party vendors is a bad customer experience. The warranty repair system that Sharp has set up forces already unhappy customers who have the misfortune of receiving a defective item to endure a time-consuming and painful process to restore their item to working order.

It also seems apparent that Sharp supplies their warranty service partners with B-grade or refurbished parts to repair their TVs. The fact that my TV’s original motherboard and two of the replacement motherboards were defective and a second LCD controller had to be installed points to some serious quality problems with the parts they use to “repair” malfunctioning equipment. I don’t really feel like I have a new or A-grade TV anymore. By the time my TV was working, I had lost hours of my own time that was way more valuable than the money I saved looking for a bargain. And given it took four truck-rolls to my home and four orders of replacement parts to get the unit working, I have to think that Sharp also lost money on my TV and would have been better served just sending me a new unit after the first (or even second) repair attempt failed. Sharp, are you listening? Needless to say, I will buy my next big-screen TV at a local retailer.