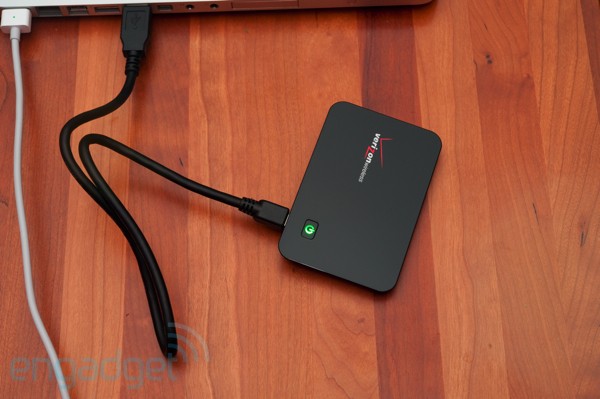 While I wait with eager anticipation to get my hands on the new iPhone 3GS, I’ve been enjoying a new gadget: the Verizon MiFi. The MiFi is a combination wireless 3G EVDO modem with an integrated router/hub and wifi, all delivered in a sleek black unit the size of a small stack of business cards.

I use a MacBook Air, and I had a Verizon EVDO USB modem, but the aesthetics of having the dongle hang off the side of my MBA bothered me, and then the unit stopped functioning, giving me an excuse to jettison it. The beauty of the MiFi is the ability to share the connection with up to 5 users — very handy (and a great way to make friends) while in the back of a car with colleagues, at a local coffee shop or anywhere that lacks free wifi. The connection is really zippy and Verizon’s coverage puts AT&T’s to shame.

Ironically, I sometimes even connect my iPhone to the MiFi because it enhances the performance and coverage I get over using AT&T’s 3G crappy network, which brings me to an opportunity to rant about just how bad AT&T is. AT&T is lucky the iPhone is a such a great device – the iPhone is so good it is succeeding in spite of the inferior network users are forced to subscribe to.

Apple’s iPhone 3GS announcement this week really put AT&T’s weakness in focus — they announced that iPhone software 3.0 would support MMS messaging and tethering functionality, two oft-requested features, yet Apple had to footnote their announcement to mention that both features were “coming soon” for those of us unlucky enough to be stuck with AT&T’s lame service.

I can imagine that Apple will be more than eager to jump to a new carrier when their exclusivity with AT&T ends. For shame, AT&T. You’ve got the most popular mobile computing device ever created tied to your infrastructure, yet you are squandering this opportunity with your lame network. I’m no network architect and I’m sure I don’t appreciate the complexities around build-out and capacity planning, but I’m guessing AT&T’s crappy network is not a result of unsolvable technical issues, but rather lack of will and general organizational inertia and incompetence. Or maybe a calculated decision to enhance profits in the short term by delaying capex. But neither scenario puts AT&T in a good light.

And yet, despite all this, I’ll be stuck with AT&T since I plan to upgrade to the new iPhone as soon as I can. I just wish I had a choice in carriers.